Born to a German Deaf mother and American Deaf father, Joey grew up in Maryland with one Deaf brother and two Deaf sisters. Joey first learned filmmaking as a freshman at the Maryland School for the Deaf from his big brother, Derry Keeshan, and immediately knew he had found his passion: recording Deaf life.

Joey headed to Gallaudet in 1985, where he continued his passion for filmmaking by majoring in television, film and photography. Realizing that job opportunities for Deaf filmmakers were, unfortunately, scant at the time, he switched to business management and graduated with a bachelor’s degree, then a master’s degree in deaf education from San Jose State University, then a Education Specialist degree in Change Leadership in Education from Gallaudet University.

In 2005, Joey participated in a Deafhood discussion, based on Dr. Paddy Ladd’s Understanding Deaf Culture: In Search of Deafhood book. After learning about Dr. Ladd’s views on discourse in the Deaf community, Joey realized that historically, the Deaf voice has rarely been heard in the media or public forums, especially because of the lack of access to American Sign Language (ASL). Joey made up his mind to return to his passion, and created his first ASL video log, or vlog, in February 2006. In his second vlog, Joey discussed the three Gallaudet president finalists just before the protest erupted. Then he did a third, a fourth and the rest is history! He considers 2006 one of the high points in Deaf history, especially because of the Gallaudet protests and the increase in vlogs made by Deaf people.

Joey lives in Pleasanton with his beautiful wife, Julie, and their three children, Jacob (13), Rachel (11), and Sarah (7). He has been at the California School for the Deaf, Fremont for 19 years, and is an instructional television teacher specialist there where he aspires to increase the emphasis on visual media for the students, our beloved leaders of tomorrow. 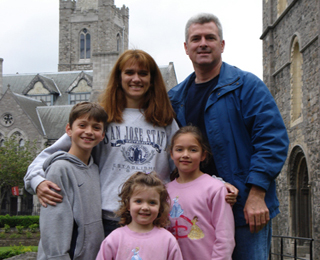